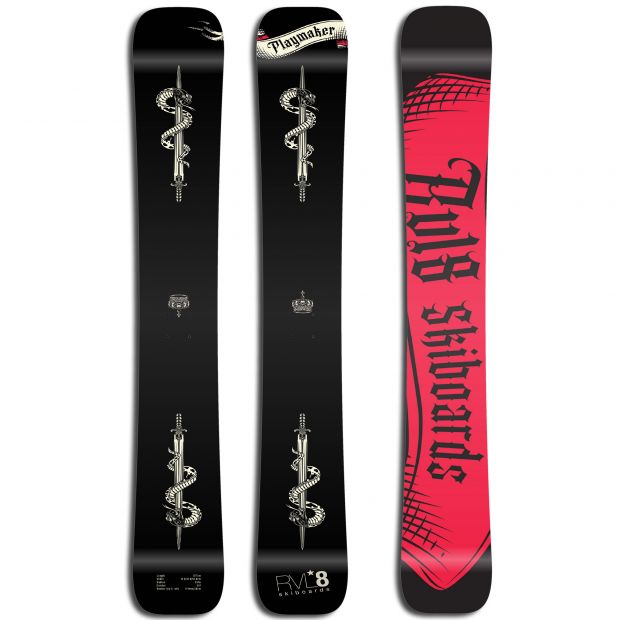 This product is not in stock

Notify me when available

If you’re not familiar with Talon Sei and his “Stuff & Things” YouTube channel you’re in for a treat. From firearms to electric skateboards, from skiboards to motorcycles, from beard care to van life, Talon’s interests and expertise know no bounds. RVL8 is proud to have collaborated again in 2023 with Talon and veteran RVL8 artist Martin Azevedo . If you’ve met Talon you’ll notice the art on his arms is very similar to his three RVL8 skiboard collaborations.

Playmaker was created with input from The Skiboard Connection, Austin Wuchter and Alan Newtson. It’s been 11 years since RVL8 released the first pair of zero camber, rockered skiboards ever made, and since then each pair of RVL8 zero camber boards have been geared toward increasing powder float, meaning wide with a soft flex. The Playmaker is RVL8’s first zero camber, rockered skiboard with a very stiff flex. While the stiff flex will reduce powder float somewhat it will greatly improve edge hold on hard snow and ice. And the 8.4mm over 20cm tip/tail rocker will enable the Playmaker to float even the heaviest rider through powder and variable snow. This is the closest RVL8 as come to creating a one skiboard quiver since the Spliff. The question will inevitably be “how does it compare to the Spliff?”. Unlike the Playmaker, the 109cm Spliff has camber and a little bit of rocker which makes it better for carving on hard snow but makes it not as good as the Playmaker in powder and soft snow. This isn’t so important for riders under 175lbs but once the rider weight exceeds 200lbs the Playmaker will greatly outperform the Spliff in soft snow while still being able to hold on edge on harder snow. In addition, the Playmaker comes standard with 4×4+2 inserts which means you can mount any pair of 4×4 compatible bindings centered or 4cm back, for even more powder float. If you need one pair of skiboards to handle just about any conditions the Playmaker is the one. Graphic design was a collaboration between Greco, Alan Newtson and Martin Azevedo.